Love him or hate him, Kobe Bryant was a legend. If you've never chucked a wadded piece of paper into the recycle bin and yelled his name, I'm not sure if we could be friends. In April, Kobe played his final game in the NBA, racking up 60 points for the Los Angeles Lakers in a one-man torching of the Utah Jazz. "Mamba out!"

Also in basketball, the Sooners made it to the Final Four, only to get blown out 95-51 in the most lopsided result in the tournament's history. Oops.

Lin-Manuel Miranda won a Pulitzer prize for this play you might have heard of called "Hamilton."

Oh yeah, and Prince died, which was probably the moment you began to get the sinking feeling that 2016 was not going to end well...

What We Said: "After an 8-month hiatus to manage the Lawton Jiffy Lube, Knuckles has released a brand new track and music video. It’s called “Big Truck.” It’s a rap-country-redneck hybrid – or as I call the genre, Crapneck – about, you guessed it, Knuckles’ unrequited love for Big Truck Tacos."

What We Learned: Not all rappers wake up in new Bugatti's- some of them come to in the bed of a beer can-strewn Silverado.

What We Said: "This whole thing reeks of the ‘Real Housewives of Oklahoma City’ show from a few years back. Remember when KFOR broke that story, and we then had to point out that it was likely a scam? At least this time, the Bravo site actually mentions the series as something they are working on, so maybe we’ll see it on this fall’s line-up."

What We Learned: Never ever believe anything you hear about a television show being set in Oklahoma.

Best Comment: "We can embarrass ourselves without you, Bravo!"

3- David Payne had a rough night…

What We Said: "Yeah, it was kind of a rough night for David Payne, but I’m willing to give him a pass. He and everyone else in the local media were all amped up and prepared for a full-blazing hardcore F5 tornado genesis, but instead they were greeted with Edgar Cruz playing acoustic guitar at Full Circle."

What We Learned: The only thing we love more than college football is getting riled up over the weather hype train.

Best Comment: "Maybe DPains was just hungry? Can’t imagine standing and gesticulating there this many hours without some cinnamon buns."

What We Said: "The building was a buzz for a good 10 – 15 second seconds following the kiss. It was a strange mix of laughter, sighs, gasps, chatter and a few “Hell yeahs.” Immediately after the kiss was shown, Kyle Singler fell to a knee and had to be escorted to the locker room."

What We Learned: Even in the fundamentalist state of Oklahoma, love wins.

Best Comment: "all forms of love should be displayed on kiss cam… We got lucky enough to hopefully get Oklahoma one step closer to accepting that love is love, no matter what it looks like ???❤️?"

1 (tied)- Aaron Tuttle’s lawsuit against us has been dismissed…

What We Said: "In what’s being a hailed as a major victory for obscure local social bloggers and tanning bed opponents everywhere, the totally honorable and awesome Judge Barbara Swinton has dismissed diabolical Facebook weatherman Aaron Tuttle’s lawsuit against us."

What We Learned: Even the finest copyright attorney who specializes in copyright law is no match for the power of the Ogle. 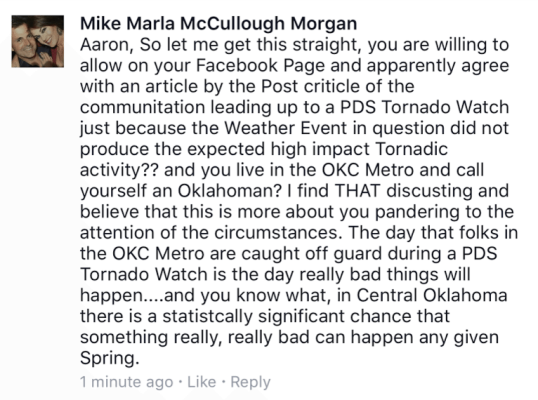 What We Learned: With the level of drama that apparently occurs between meteorologists, maybe Bravo needs to look at filming a "Real Weathermen of OKC" program. The bickering and potential for Level 5 Weather Dongs has me hot and bothered...

2Comments
Patrick
November 24, 2022
Everything Else