We have some sad news to announce.

A few weeks back, in a bold move to strengthen her campaign, Carol Hefner named Lost Ogle proofreader – Nathaniel W.H. Savage "Quatro" the IVth et al. – as the new copy editor for her "OKC is Hell on Earth" signed Angry Karen from Rose Creek mayoral campaign.

Nathaniel, using the skills he learned under our tutelage, hit the ground running and didn't disappoint. Check out the following postcard Crazy Carol Hefner sent out last week:

Yep, let's "Take Our City Back!", says the Karen who can't even be counted on to proofread her own campaign materials.

Seriously, what a putz. She misspelled February and used an "Out" for an "Our." Well, at least I think she did. Knowing Carol like we do, she could also just be supporting a special brigade of law enforcement that prevents people from coming out of the closet.

In addition to the circled items above, there are three other mistakes on the postcard. They are:

She misspelled her own name...

In all fairness, I think most Oklahoma City residents would rather vote for Carol Herner than Hefner.

You don't need to be an English teacher or gastroenterologist to know that there shouldn't be a space before a colon.

Black man agreeing to be photographed with Carol Hefner

I'm honestly scared to know what that man is signing away in those documents. In all fairness, he probably wasn't aware of some of Carol's more blatantly racist and offensive Facebook posts. You know, posts like these:

The typos on Carol's postcard were so egregious that even local conservative groups complained:

Seriously, if you're going to embark on some alt-right propaganda-fueled campaign to finish second in the  Oklahoma City mayoral race, at least have the dignity to use a local group of nutjobs who proofread their work! I looked into Carol's campaign filings, and it looks like she's being milked by McShane LLC out of Las Vegas. I'm not good at Craig Humphreys' "New Math" but I'm pretty sure Carol's spent over six figures with them.

Anyway, when all this first came across my screen, I seriously wondered if the typos were intentionally put in the postcard as some sort of false flag operation. Let's be honest – it's probably the only way for Carol to get people to pay attention to her campaign materials. But then I saw this FB post, and, well, let's just say Nathaniel W.H. Savage "Quatro" the IVth is doing a hell of a job! 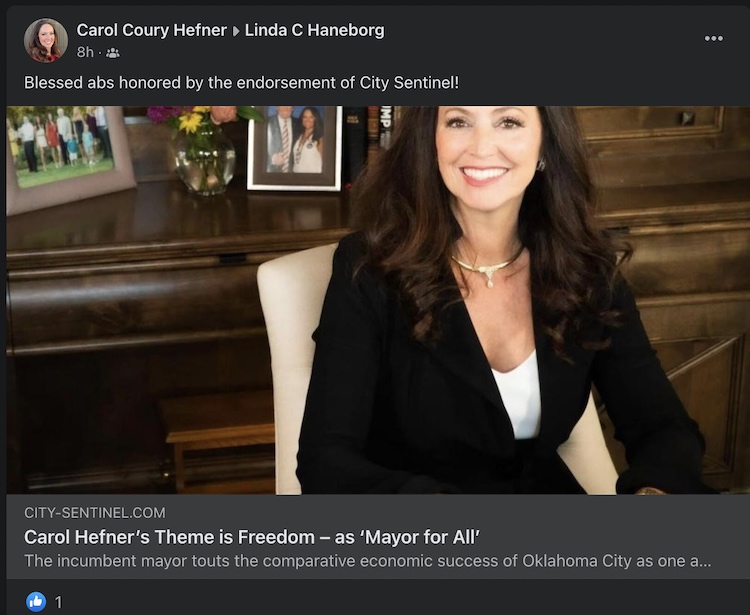 Louis Fowler
January 31, 2023
Everything Else