Blake Griffin is not pretty in pink…or in drag. 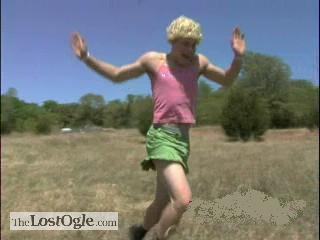 Maybe it's a holiday hangover, but for the past couple days I've suffered from a severe case of writer's block. Fortunately for me, the cure (random pictures of Blake Griffin dressed in drag) popped in my inbox yesterday evening.

Yeah, sometimes this blogging stuff can be too easy.

That being said, I was still somewhat hesitant to post pictures of my favorite team's best player frolicking through a summery field wearing a pink halter top and green skirt. It just seemed like the wrong thing to do. Seriously, I can already picture Clark Matthews and all the agricultural engineering students in Stillwater dressing up like this for a Bedlam game. But then I figured who the f*ck cares, that's Blake Griffin! Regardless of what the opposing team's fans wear or say, he'll still drop 30 and 15 and be the first pick in the NBA draft.

Anyway, these pictures are just awesome. The only thing that could make them better would be if they included Courtney Paris dressed up like a 1920s French bachelor wearing an old gray suit with a thin painted-on mustache and top hat. And those would only be better because they would bring more lesbians to our site. And other than Brent Skarky, who doesn't like a good lesbian?