It's official. In a moment many people thought would not happen in their lifetime, an African-American will be the nominee of a major party for the office of President. Of course, the woman who is now mathematically eliminated still has not quit and is sending veiled threats of what will happen should she not be the running mate. There will be a lot of pressure for Barack Obama to select Hillary Clinton for his Vice Presidential candidate, but there is no guarantee it will happen. In fact, through our wide reaching network of Ogle moles, we have found out that several people on the shortlist have Oklahoma ties. They include:

One theory of selecting a Vice Presidential candidate is to select a person who "balances the ticket." Who would be more of a yang to Obama's yin than Sally Kern?

A lot of Hillary Clinton's supporter are demanding that Obama select Hillary as his running mate. That comes with a heckuva third wheel in the form of a former President distracting from the Obama platform. To appease those feminist supporters, Barack could select a different female candidate and it might as well be one of his most loyal followers. 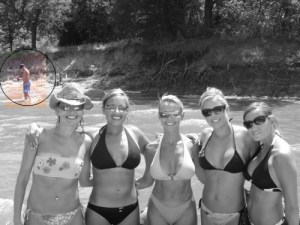 The Guy in the Background of the Pink Bikini photo

I know almost nothing about this guy. However, there are five hotties in bikinis posing for a photo (one of them semi-famous) just yards away from him, and he still manages to maintain concentration on his fishing. The man is either blind, or else he is the most focused person on the planet. If Obama brings him into the administration and gives him a task, it will be accomplished.

The Clintons had Roger for comic relief. The Bush administration had George W. Bush. The Obamas are missing that. Selecting a guy who would steal a guitar from a cross dressing rocker at a rodeo, though, is bound to cause some hijinks.

The only thing that could make Obama more of a rock star is to campaign with a rock star. What I picture is Barack giving his incredible speeches while Wayne provides back up on the guitar. Of course, this would all be coordinated by the new campaign manager, Will.I.Am.

Sure, he hasn't run for office since losing to David Walters in the 1986 Democratic primary for governor. Dealing with Burns Hargis for fifteen years, though, deserves some kind of payoff. Vice President might be the only way of evening the score.

John McCain has his wife's daddy's beer distribution fortune to fall back on. All Obama has is 1.5 million citizens offering spare change to run his campaign. Thanks to the economic policies of the past eight years, those people are going to run out of expendable cash and Obama will only have the royalties from his book sales to keep him going...unless he brings in a benefactor as his running mate.

Obama may know how to pack a crowd and get them into a frenzy about "the fierce urgency of now" but he knows nothing about running the wishbone. Tap Coach Switzer as the V.P. and that problem is solved.

This one is not really a joke. Patrick thinks I'm crazy, but I think that Brad Henry should be on the short list. For one, a democrat who can get elected statewide in Oklahoma twice has to be someone that the party can use nationally. Second, as an unabashed Baptist, Henry's appearance on the ticket would allay the fears of the morons who think Barack is a covert Muslim trying to infiltrate the U.S. Executive Branch so he can give a Presidential pardon to Osama bin Laden. While I hate kowtowing to the brain dead, it's hard to win without at least convincing the idiot vote to stay home. Finally, Henry can appeal to moderates who think Obama is too liberal and maintains the "new brand" of politics image that has become synonymous with the Obama message. So, I think he should at least make it to the vetting list. Patrick, on the other hand, thinks he would be another Dan Quayle.

So, what have you guys been hearing?

Clark Matthews is a world-class checkers champion, co-founder, and basketball editor-emeritus of The Lost Ogle