Earlier this week, American Idol returned to the living rooms of sad, lonely aunts all across America after a much-needed and sadly not-permanent hiatus. One of the scene-stealers was 19-year-old Enid musician Benjamin Glaze. He sucked at singing and playing guitar, but during his audition, he received his first ever kiss from pop starlet Katy Perry.

Wait. What? A 19-year-old musician had never been kissed? That's weird. I thought kissing girls was the reason guys learned how to sing and play guitar in the first place?

That's nice and everything, but it's quite obvious the whole thing was staged. I'm sure the producers learned via some questionnaire or pre-audition interview that Benjamin had never been kissed, and then set it up with Katy behind the scenes. That's how real "reality" TV works. It's also why if I ever audition for American Idol, I'm going to tell the producers that I've never touched a boob.

Bad, immature jokes like that is probably where this story should end, but since we now live in a sensitive, angry society falling into a deep abyss of idiocracy, it doesn't. After the episode aired, Katherine Rossman with the New York Times interviewed Benjamin to get his thoughts on the kiss. After likely cornering and baiting him into certain responses that fit her preferred narrative, she found a way to turn an innocuous TV kiss into a mainstream media-generated social outrage controversy.

Check out this madness:

An Unwanted Kiss on ‘American Idol’

When Benjamin Glaze, at the time a 19-year-old cashier from Enid, Okla., auditioned for “American Idol,” he had hoped his big moment would come as he belted out “Stadium,” a song he wrote himself. That or Nick Jonas’s 2015 single “Levels.”

Instead, it came when the popstar Katy Perry, a judge on the show, surprised him by kissing him smack on the lips, moments before his audition. He had never been kissed before.

“I was a tad bit uncomfortable,” Mr. Glaze said by phone this week, after the incident aired on the season premiere. His first kiss was a rite of passage he had been putting off with consideration. “I wanted to save it for my first relationship,” he said. “I wanted it to be special.”

“Would I have done it if she said, ‘Would you kiss me?’ No, I would have said no,” he said. “I know a lot of guys would be like, ‘Heck yeah!’ But for me, I was raised in a conservative family and I was uncomfortable immediately. I wanted my first kiss to be special.”

Hey, Benjamin The Pious. Your first kiss was with Katy Perry and it was shown on national television. You were one dancing shark in the background away from being a national cultural icon. Your first kiss was very, very special, and probably better than any guy or girl you meet in Enid. Enjoy it.

Even though it aired earlier this week, the audition itself took place last October and this has given Mr. Glaze, who is now 20, some time to consider the event with perspective.

The kiss did result in his getting more screen time, which has helped draw attention to his music. “So in that way,” he said, “I’m glad she did it because it’s a great opportunity to get my music out.”

When he returned home, Mr. Glaze worked through his feelings about the kiss by talking to his friends. “They agreed with me that it didn’t really count,” he said. “It was lip contact versus a romantic situation with someone you care about. That’s what a real first kiss is.”

He said he does not feel he was sexually harassed and is grateful to Ms. Perry for tweeting about him.

You know what, take back the snarky shit I said about Benjamin. I like this guy. That's a sane, rational response to a stupid situation. He didn't overreact. He realizes the kiss was a meaningless, staged, made-for-reality TV event. It's no big deal.

Knowing that, why does Rossman bring sexual harassment into the conversation? What reasonable person would watch that clip and think it's sexual harassment? Cue the angry Twitter commentary:

“It was a forced sexual act,” one viewer posted in reply to American Idol’s tweet: “Imagine if this was from a male judge. Has @katyperry not taken anything from the #metoo movement?” In the same thread, another viewer wondered if Mr. Glaze’s religious convictions had been disrespected. And many other viewers mirrored the sentiment of one fan, who wrote, “Lucky son of a gun.”

The "one viewer" the Grey Lady quoted is a 20-something model and violinist who apparently thinks staged realty stunts are real life. Why does the unqualified opinion she shared with 400 twitter followers hold any merit in America's newspaper of record? Stupid people have stupid thoughts all the time! Why share it?

Well, let me share with you a little media publishing secret. Social media outrage / controversy is low-hanging journalism fruit. It's easy, cheap, and gets tons of clicks. I should know because I've been capitalizing on it for years. Hell, I'm capitalizing on it right now! It's almost too easy. People, me included, eat this stuff up.

Naturally, the New York Times report triggered into action a domino effect of articles from the desperate entertainment clickbait media, turning an innocuous non-event into controversy. Check out all this crap: 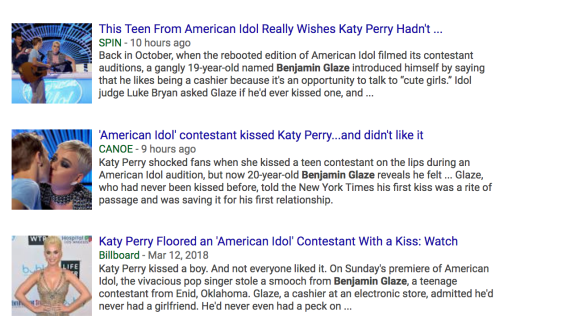 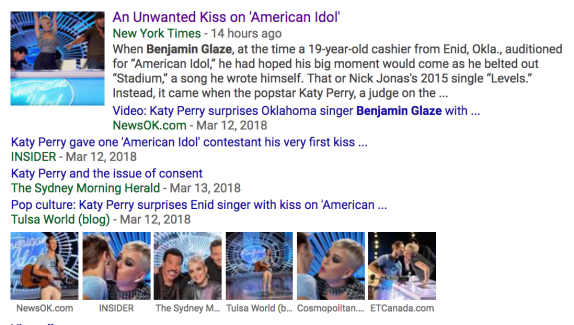 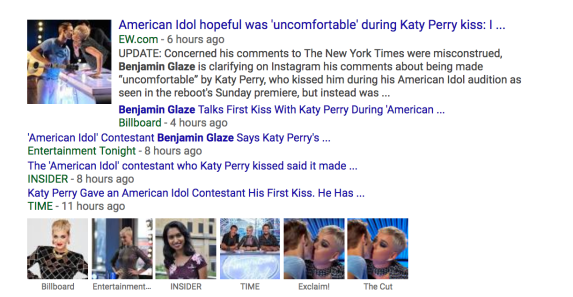 Jesus H. Christ. A few people get mad on Twitter, America's newspaper of record amplifies their message and all of a sudden a controversy is in full effect.

Last night, Benjamin hopped on Instagram to try to calm down the situation:

Once again, what a sane logical response. It's like he understands that all of this occurred on a "reality" television show. It's not really real. These people are basically paid actors playing exaggerations of themselves for entertainment purposes. It would be like an actor and actress kissing in a movie. Don't be fooled.

Of course, the mainstream media doesn't want to tell you that because they're owned by massive corporations that make money airing this mindless garbage. Reality trash is about the only thing on TV now. It's a medium so powerful and influential that it can literally get a fake businessman elected president. Screw fake news. It's the fake realty peddled by these massive for-profit corporations that's tearing this country apart.