Mary Fallin’s “The State of the State” address in pictures…

Yesterday, Governor Mary Fallin gave her annual "State of the State" address at the State Capitol. The Oklahoman actually provided pretty good, semi-balanced coverage of the event. They even led with most insane part of the speech.

Oklahoma Gov. Mary Fallin on Monday called on the Legislature to cut the state's highest income tax rate by 0.25 percent and recommended that lawmakers cut most state agencies' budgets by 5 percent to help pay for it.

“I believe responsibly lowering the income tax is the right thing to do,” Fallin said during her State of the State address. “Let's take this opportunity to show our country that lower taxes and limited government do work.”

That makes perfect sense. Let's cut services across the state so that a few wealthy Oklahomans can put a few extra hundred dollars in their high-end savings account each month. How are state agencies going to handle these cuts?

Fallin said she knows her request for 5 percent cuts in most agency budgets will cause some to proclaim the sky is falling.

“But guess what? It's not,” Fallin said. “Any business worth its … salt can find 5 percent cost savings without crippling the services it provides. Families have to make the same decisions and the same choices all the time.”

What a great example. Talk to the C.E.O. of any company "worth its salt" and they'll tell you it's easy to find 5-percent in cost savings. All you need to do is reduce spending and layoff employees. That's always a great thing for the economy. Not only do people lose their jobs, but vendors, suppliers and contractors then lose revenue and have to layoff workers and cut spending. At that point, the dominos begin to fall. Consumers spend less, more layoffs occur and unemployment rates skyrocket. With so many unemployed workers and fewer quality jobs, people then turn to the leaching bureaucratic evil government for economic assistance. The only problem is the government can't help anyone because all agencies are dealing with their own 5% budget cuts. But yeah, back to what Mary said, any business worth it's salt can easily find 5% in cost savings.

As I mentioned above, the Oklahoman's coverage was pretty fair and balanced. Well, at least it was for the Oklahoman. They didn't overly promote any of the conservative rhetoric, and they were fair with everything. They even had a photographer on hand to take awkward photos. Let's take a look at some of them:

As is now custom, Mary Fallin began the speech by showing off her invisible popsicle.

Anyone else creeped out by the old dude in the back trying to sneak his way into the hug? Why's he patting that dude on the back? That's as awkward as getting drunk and dry humping a platonic friend. Okay, maybe not that awkward, but close. Speaking of dry humping, nobody's a fan of it. But we've all done it. And yeah, I have no clue what that has to do with anything.

I like how the three dudes behind the American flag are all taking notes. It always sucks to get seated near the front of the class, huh?

These guys are members of the Moore police and fire departments. They received a well deserved standing ovation for their efforts following the May tornados, and to the delight of the crowd, demonstrated their new free kick defense wall.

p.s. - You can see Christina Fallin in the background wearing sunglasses. I would do the same thing if I showed up stoned to a "State of the State" speech.

Out of all the people in that photograph, which one do you think just farted? The natural instinct is to go with the douche wearing the bowtie or the guy with the finger over his nose. Those would be good guesses, but I'm a firm believer in the smeller being the feller, and the smeller in that photo is obviously the lady up front.

Mary Fallin's call for Subway to extend their $5-footlong promotion through February was met with resounding applause.

Can we get a more awkward set up? It makes me want to flick a paper football over Mary Fallin's head. 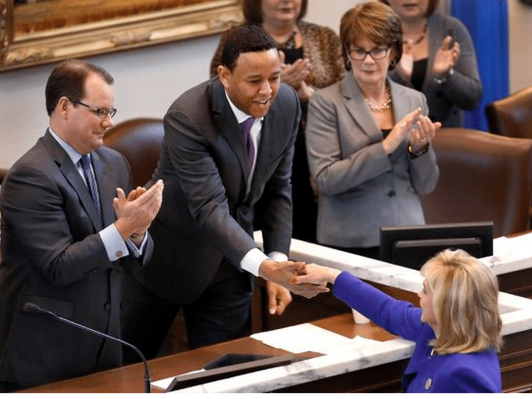 Unless TW Shannon upsets James Lankford in the US Senate race, there's a good chance one of those guys will be our next Governor. I'm not sure if that's good or bad.

"By the way, I have your broom in my car. Want to grab it after the speech?"

"I can't. I have to pray for gays later. Care if I send one of my evil flying monkeys over to pick it up?"

"Sure, that will work. I'll send you over some newt tails, too."

"That man… up there… whose name I can't remember.... will not stop looking over my shoulder."

Anyway, you can view all the photos and their original captions over at NewsOK.com. Have a blessed day.

3Comments
Patrick
January 25, 2023
Everything Else