This pic is from KFOR's Sunday night sportscast.  Apparently, they were doing a story on the Oklahoma Roadtards Sooners' struggles outside of Owen Field. 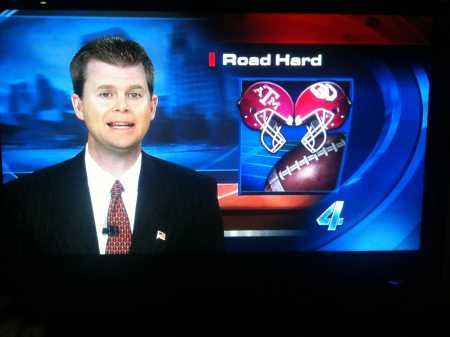 Obviously, Road Hard is a pun for something, but what's it a pun for?   Is it simply riding something, uhm, hard, or is it an activity that Marisa says requires dark tinted windows and long stretches of highway?   Of course it could also refer to some backwoods rural Oklahoma tradition that I know nothing about because I'm wise and sophisticated.

Regardless, whoever writes the little captions at KFOR obviously needs a raise.   That person may be the coolest TV news caption writer ever.  Unless, of course, the caption was written by Bob Barry Jr.  Then it's just sickly perverted.