Around this time last year, we released our first ever Oklahoma Halloween Costume ideas. The idea was that you could wear these costumes to Halloween parties and perhaps have the most creative costume.

Some of the highlights were:

It's hard to top a list like that, but we tried our best. Check all of them out after the jump.

This would be a good group costume idea. Just get a couple of guys to wear everyday, business casual clothing. When you get to your Halloween party, just walk around the place and try out all the host's furniture. If you want to get real creative, bring a small dog or child to put in your lap.

If you want to get gross, bring a gerbil.

3. Wanda Jo Peltier Stapleton
Wear a fancy checkered jacket and gold shirt . Throughout the night, yell at trick-or-treaters for walking in the grass. Tell everyone you hate the NBA and complain about the loud music and price of groceries. Even bring along some paper bags and tell everyone you are going to go to Aldi later. In the middle of the party, turn the TV to an old "Murder She Wrote" episode and fall asleep.

4. Van Shea Iven
Go to a sporting goods store and buy an assortment of athletics gear. Wear it all to the party and in a awkward, high pitched voice, announce to everyone what a great high school baseball player you were. 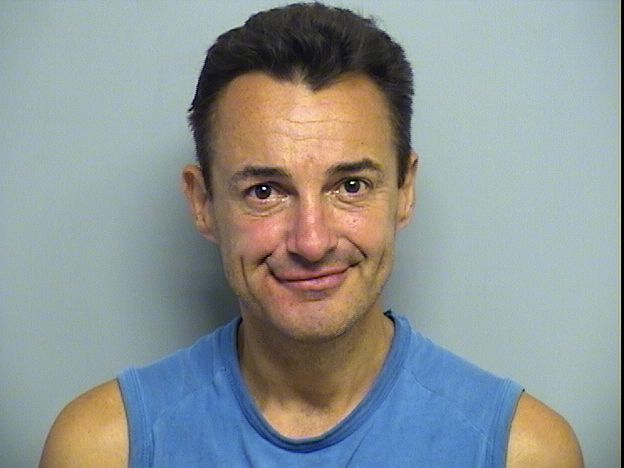 5. Jerry Giordano
Yeah, this one may be a bad idea. Uhm, put on a blue tank top and mesh shorts and get hammered. Take some melted chocolate and smear it all over your legs and shorts.

6. Gladiator from the Brent Rinehart Comic Book
I think the picture describes this pretty well. However, to make it absolutely perfect, you'll need to carry around a miniature Brent Skarky.

7. BJ Wexler
BJ is the host of the OETA Move Club. Simply put on your nicest late 1980's sweater and walk around with a bag of popcorn, or for even better effect, roll around an entire popcorn machine and dance to this song!

9. Ed Kelly
To be Ed Kelly, you need a terribly weird hair cut and big thick glasses. You then walk around your party and give mundane and archaic opinions on Oklahoma politics.

10. Sally Kern's 32-year-old, celibate heterosexual son.
Not only is this guy celibate, he's also a musician and metaphysicist, so there are plenty of ways to go with this one.

11. The Fake Mo Dampeer:
Put on a nice fitting white shirt, blue jeans and write the number 31725 on a sheet of paper and hang it around your neck.

12. Randy Terrill
Wear a suit with an OU tie. Top it off with bald head cap. Whenever you see any Hispanic person, chase them away.

This would be a pretty easy costume for me. I would just need to shrink a few inches.

14. Adam Knapp
Yeah. While doing research for this list, I ran across this guy. Apparently, he is the Oklahoma City writer for about.com. He has a post that covers this exact same topic. He lists himself as a costume. Here's what he says:

The Look: For Halloween this year, take the incredible opportunity to dress as one of the most dynamic and influential power players in the metro area. Watch everyone swoon in your presence, people line up just to meet you and the crowds beg to be near you.

Requires: You'll need an incredible smile, a slight but suave beard and... What did you say? I'm in a fantasy world? Oh. Ah, that's what Halloween's all about.

Pretty good. I think the only thing he forgot was to add "circa 1995 Haircut" somewhere in the description.