Warning: Do not visit TheSportsAnimal.com! 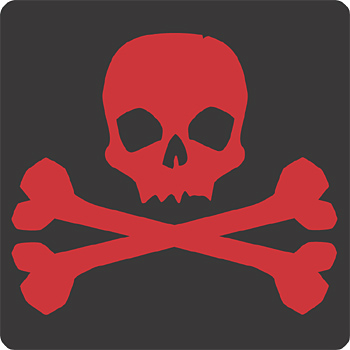 The Sports Animal is terrible.  I know it.  You know it.  They know it.  Yet despite this valuable knowledge, we all march on like lemmings, listening to daily discussions about Norman North Football, Johnnies Coconut Cream Pie and USA Top 25 Lists.

Seriously, it sometimes makes me wonder if they transmit heroin through the airwaves.  Which is why I make this simple plea:  Do not visit TheSportsAnimal.com!

You see, the content found on their website (which shall never be mentioned here by name again), is actually worse than the stuff they talk about on air.  And it is my legitimate fear that naÃ¯ve, innocent people will begin to visit their site on a daily basis, thinking that they are getting in-depth sports coverage by subjecting themselves to bad blogs and a new travesty called "Sports Animal TV."

After the jump, I provided some samples of their website content as public service. Hopefully, reading it here will prevent you from visiting that very bad place.

Edlam version one last Friday was a defensive battle with North beating Memorial 9-6 in front of a packed house, part two takes place this Friday with Memorial taking on Sante Fe who will be without starting RB Randy Ponder who hurt his knee agianst KC Rockhurst last week.

Been busy up at the station, but can't believe that Appalachain St pulled off the greatest upset in college football history.  I gotta say I didn't see that one coming.  Count myself and the Steelman in the crowd that has the dubious distinction of predicting a team to play in the Nat'l Championship game only to have them beat on their home field by a I-AA school.
Houston has played well at Oregon (my lock of the week), except for 4 turnovers and a blocked punt.
Nebraska got off to a slow start but looks good under Sam Keller against Nevada.
Missouri is playing very well against an overrated Illinois team and Mizzou looks in my estimation to be the favorite in the North.  Illinois is coming back as I write this"¦"¦.now down 37-27.
Notre Dame looks offensively inept against Georgia Tech.  Tashard Choice is over 100 yds w/a touchdown.
Don't get too excited about Tim Tebow just yet.  Remember he was playing against a Western Kentucky defense today.

"¢ And how about this "riveting" clip from Sports Animal TV of Audra and some other girl walking accross the OU Campus.  I would post the video, but fittingly they use some weird flash video embedding software.

That's about all I really feel comfortable showing.  If you're smart, you'll see stuff above, move on with your day and never ever vists the-site-that-shall-not-be-named.  If not, and you fall victim to temptation, just remember: I told you so.