Al Eschbach drugged, robbed and stabbed with fork during vacation to Colombia…

So, how's that for a headline?

Last night, I got a call from an Ogle Mole asking me when I was going to write about Al Eschbach's recent vacation misadventures.

I had no clue what the Mole was talking about, but since I, like most long-time Sports Animal listeners, know that Al Eschbach loves taking vacations to exotic spots that are notorious for their brothels, sex workers and human trafficking, I figured it had to be a good one.

The Mole then explained that the 76-year-old Eschbach spent most of Monday's radio show talking about how he got mugged, drugged, and stabbed with a fork during an attempted robbery while vacationing in Colombia. You know, run-of-the-mill bad vacation stuff.

A few hours after the Mole called, I then received the following DM from a different Sports Animal listener. It lines up with what the Mole told me on the phone call. 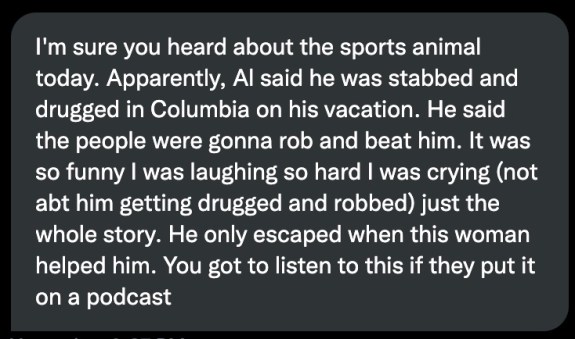 Listen. It's never funny when someone gets drugged, stabbed, robbed, etc., during a vacation, but with the way Eschbach tells a story, I'm sure it was funny. In fact, I wonder if it will inspire a new set of copy points for The Sports Animal's next Oklahoma Men's Clinic Ads:

"Hey fellas, are you an Alpha male who likes to take vacations to places like Singapore, Thailand, and Colombia? Do you want to get the most mileage out of your sex dollar?? Do you need extra muscle to fend of fork-fighting attackers??? Hi, I'm Greg with the Oklahoman Men's Clinic. If you answered "Yes" to any of those questions, don't be a sissy-man. Put down the beer and radishes and call us today!"

Then again, it's also kind of sad. Al Eschbach is old, semi-blind, and has obviously seen better days. It makes you wonder if the incident was a robbery attempt, or if one of the bouncers outside a Medellín brothel mistook him for a chupacabra!

Anyway, I'm hoping the Sports Animal puts Al's story on their podcast page so I can listen to it firsthand, but I doubt they will. Although it would get a lot of downloads, I doubt they really want to publicize that one of their flagship voices routinely takes vacations to places that are notorious for prostitution and human sex trafficking. Until then, I guess you can read this story about the time a Hooters waitress inadvertently shared some details about one of Al's trip to Thailand. You'll never eat strip club ice cream ever again.

UPDATE: Al's story is now available on The Sports Animal website! Seeeeeeeeeeeee ya!

Patrick
February 8, 2023
Everything Else