For the past few weeks, the map below has made the rounds on the Internet. It identifies where the most Craigslist Missed Connections occur in each state:

When I first saw the graphic, I was a bit embarrassed. The state fair, really? Why can't we be normal and have missed connections at Walmart? The State Fair runs for a couple of weeks. Walmart is open for about 8,750 hours a year. Seriously, I can only imagine how awful some of the State Fair missed connections could be. Here are some guesses:

- M4F: You were drunk and eating a corn dog on stage. You called for Jeff, but he didn't come. I'll take care of you.

- F4M: You had a snake in your pants in the newest iPhone. Your sideburns make me all hot and bothered.

- M4M: You chased me out of the bathroom before we could finish. I loved your tattoos. If you're reading this, email me the color of your boxers so I know its you.

I don't know if they were that bad, but they could be.

Anyway, this news inspired me to hop on Craigslist yesterday and take a look at some local missed connections. I didn't see any for the Oklahoma State Fair, probably because it came to a close six months ago, but I did find a bunch of other creepy, gross, weird, sad and pathetic missed connections.

Check them out. All of them are real. Most are spectacular.

First of all, after going through several weeks of missed connections, I determined three general things about Craigslist posters.

1. Gay men (M4M) are very dirty, direct and enjoy hanging out at the Downtown YMCA
2. Women (F4M) are sad, depressing and bitter
3. Straight men (M4F) are pathetic, usually married and usually wanting to have an affair.

Let's check out some of those pathetic men:

Yeah, I'm sure this lady's checking out the Missed Connections each day for that chivalrous knight who was too scared to help her load groceries into her SUV. What a gentleman.

Outside of being told she's fat, there's nothing a woman loves more than being referred to as "older." 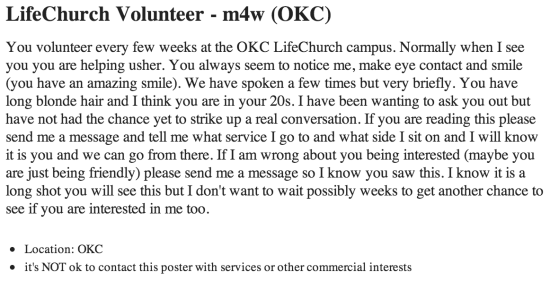 Isn't being nice and welcoming the primary the job of a church usher? You know, to notice someone, smile, and give them the program? I bet this guy thinks every Hooters waitress likes him, too.

That is a big tip. Did she do something to the ice cream?

In all honesty, I really doubt the waitress cares why you got drunk and tipped her $580. If someone gave me a 2,300% tip, the last thing I'd do is ask any questions.

And was the big tip supposed to impress her? It's like you're saying "Hey, look at me. I have my dad's credit card and am irresponsible with money!"

I'm only including this one because it gives me a chance to link to this. Remember, I'm now a fan.

Instead of posting this on Craigslist, the guy should have fed the girl some hay and crackers! She would have really like him then.

Also, remember how we finally got someone to upload the old "Don't Lay That Trash On Oklahoma" video to YouTube? We need someone to do that for the old Arbuckle Wilderness spots, too. "The Animals Are Waiting For You! Duh Duh Duhhhhh!!!" is an important and missing piece of my childhood, and not nearly as disappointing is actually going to Arbuckle Wilderness.

Anyway, that's it for the pathetic men seeking women. Let's take a look at gay men seeking men. As I mentioned above, they gay Craigslist posters are much more direct. They also may be prostitutes:

That sound you just heard was 20 different bottles of disinfectant spray being opened in the downtown YMCA locker room. That steam room is gayer than the HiLo Bathroom and Affair of the Heart.

Apparently in between blowing dudes at Chesapeake, this guy aged a year. Happy birthday!

I would recommend that this guy start working out  at the Downtown YMCA.

The secret question is "What color is your coat?" That's the best you can do?  I'm going to take a wild guess and say it's OSU orange.

Scott isn't the only Hobby Lobby employee to be targeted by an online crush. This woman wants Shane to know he's wanted material:

Wait a second. Notice how the two Hobby Lobby postings end the same way. I'm not Gene Parmesan or anything – sorry, had to to it – but I think someone is playing a prank on Scott and Shane. I blame the always rambunctious David Green.

One other thing. Have you noticed there are hardly any famous or successful people named Shane? Seriously, google "Shane" and the auto-fill results are Shane West, Shane Dawson and Shane Battier. I haven't heard of the first two guys and I can't stand the third one. If your parents named you Shane, they probably meant "Shame" because that's what you're bringing to their family. Would you vote for a presidential candidate named Shane? Probably not.

I'll admit it. That was me. Please send a picture of you and your friend, preferably making out, to TheLostOgle@gmail.com to verify it's you. Also, just to be safe, let me know what color coat you were wearing.

Most of the Missed Connections posted by females were as sad and lonely as Bricktown on a Sunday night. I think half of them were written while listening to Delilah:

Geeze, my wrists cut themselves after reading that one.

Anonymity is how my crush will be? Thanks, Yoda.

In all fairness, I was referring to my unexplainable connection to the Biltmore hotel. You have to admit it's kind of odd, but whatever.

Love’s makes cameo in The Last Of Us…

5Comments
Patrick
February 3, 2023
Everything Else