We have learned through the Ogle Mole Network that Christina Fallin, an American consultant, artist and public figure (her words, not mine), is single again. Shocking, huh?

Her soon to be ex-husband Eric Smith filed for divorce in Oklahoma County on Thursday, November 29th. The filing comes less than six months after the couple eloped in Arkansas, and just eight months after Fallin's marriage with indie rocker / Chanel obsessed hipster Matt Bacon was annulled in the Oklahoma courts. In case you're keeping score at home, that's two failed marriages in less than one year. Someone may want to inform Christina the "family" part in her mother's campaign slogan is based on quality and not quantity.

Here are some tweets that OKC Thunder back-up center Hasheem Thabeet and Dean Blevins sent out regarding the news: 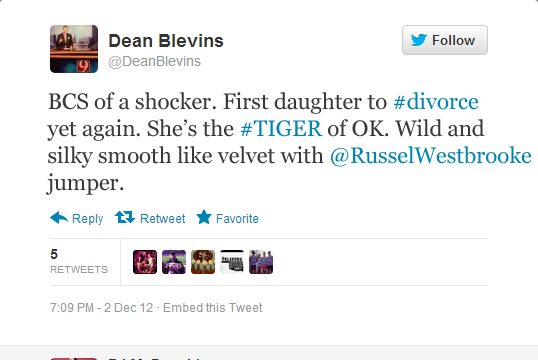 Okay, those tweets are fake. You see, I used up all my Christina Fallin marriage, annulment and divorce jokes six months ago and couldn't think of any new ones to write, so I went with the made-up tweet route instead. Sure, it's kind of lazy, but who would have thought her second marriage would be shorter than the first? I didn't conserve any material or plan ahead for that.

I did ask around the Ogle Mole Network to see what happened, and apparently the Smith - Fallins were not a very happy household. The couple and Smith's 14-year-old son lived in a two bedroom, one bath apartment above Sara Sara cupcakes on 9th Street. The cramped spaces and abundant supply of overrated sushi led to a very short honeymoon period. Christina apparently didn't want to change her partying ways, and Eric Smith, well, he's just a weirdo who makes shitty cupcakes.

Anyway, I guess we should wish both Fallin and Smith the best of luck. Divorce sucks, even if you were married for less than six months and it feels more like a normal break-up than an actual divorce. Hopefully they both learned several lessons, with the most important one being to not elope in Arkansas with some eccentric weirdo hipster that you barely know.