The Travels of Cardboard Jim: The Norman Music Festival

Last Sunday, I told you about the three of us going to the Norman Music Festival as "official" members of the media. It was kind of a neat experience to walk around the festival with a lanyard-clad press pass dangling around my neck, but what would really be cool is if next time we can get press credentials to something that isn't "Free." You know, like an OU football game or Nite Trips.

Anyway, I would say the advantages of having press credentials to a free Music Festival are:

• George Lang will grant you an interview. And then cautiously laugh when your camcorder battery dies after the first question.

• People will be more prone to appear in a picture with our dear friend, Cardboard Jim Traber.

Oh yeah, I forgot that this was about Cardboard Jim Traber. He sure did cause a ruckus at the Norman Music Festival on Saturday. As the photos after the jump clearly illustrate, wherever he goes, mischief follows.

Cardboard Jim was immediately recognized and offered a t-shirt by the Wimgo gals. He got three phone numbers, too.

He then went to see his friends from NONzine. Cardboard Jim writes erotica fiction for the NON under the pseudonym "Chubby Johnson."

Then he shaped the minds of our youth.

But Cardboard Jim was soon accosted by his fans!

To get away, Cardboard Jim went and danced with his homeboys from back East.

After dancing, he went to cool off and drink some Iron City brew.

But then he got distracted, and started drinking with the ladies.

And more of his homeboys from back East.

And then some local artisans...

But then Jim got too drunk and challenged this girl to a game of basketball.

After the loss at basketball, Jim and his coach were not pleased. They blamed the officials.

So Jim went and threw up in the portable toilet.

Refreshed, Jim partied with the Eschbachs.

Jim then set his eyes on a lady he admired. His friends told him how to approach her and go for the "big fly." 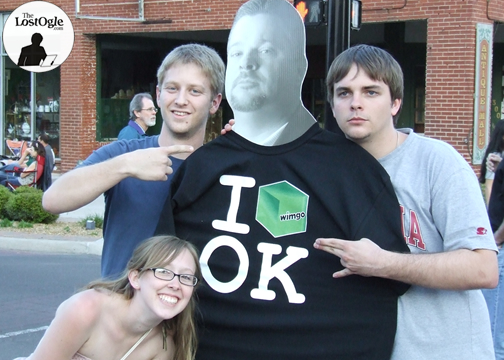 But Cardboard Jim was denied!  She "just wanted to be friends."

Jim was then sneak attacked by members of Roger Clemens posse.

But this Crip and his group of fair maidens rescued Cardboard Jim.

Rejuvenated, Jim showed this excited fan how to break in a baseball mitt.

He gave these in-shape youngsters some workout advice.

He conversed with this musician from "Mideon" about chord progressions and vocal harmony.

Anyway, that's it for this edition of the Travels of Cardboard Jim. For even more photos, including ones that were not too hot to show you here, visit our MySpace Page!