As Dustbury commonly points out, examining search engine stats can sometimes be a scary venture. As the graphic below clearly shows, they can also be really scary. 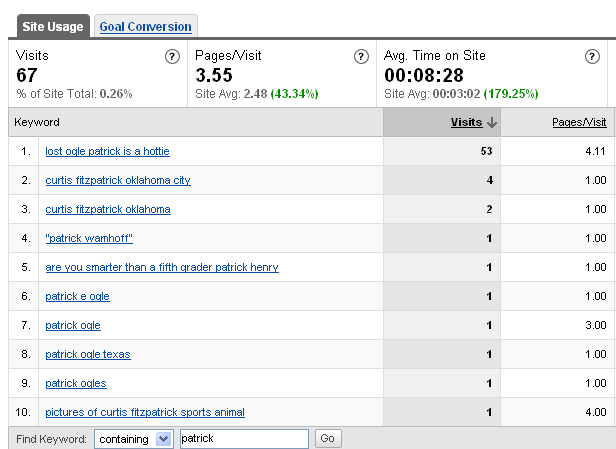 WTF? What person or thing or evil robot or drunk girl from a bar would google "lost ogle patrick is a hottie" 53 times during the month of January? I am holding on to the slight hope that it's some of Amy McRee's river friends or one of these ladies, but I doubt it. Tony told me it could be Clark Matthews playing a practical joke, but Clark hasn't made a good joke since that whole Toby Keith's "I love this Bowl" thing (ouch!).

Anyway, I'm not going to worry about it, because I guess having a weird internet stalker(s) is kind of a cool thing. And it could be worse. For example, I could be former KOCO weatherman Aaron Tuttle. Just check this out:

Yeah, 22 people have landed at The Lost Ogle in hopes of finding something related to Aaron Tuttle being gay. Who knows, maybe he did well in a body building competition or perhaps Rick Mitchell is mad about the brutally honest stuff Aaron wrote about at OKCtalk.com. But my vote is that this whole story had something to do with it. It just doesn't get any ghey-er than that.