Oklahoma’s new “Imagine That” branding campaign is even less original than we thought!

Last week, we acquired and published the pitch deck for Oklahoma's new marketing and branding campaign. It will apparently be released by Governor Kevin Stitt sometime in February, if – of course – he hasn't already changed his mind due to all the negative attention and feedback it's received.

In case you already forgot the forgettable, the campaign is built around the slogan "Imagine That." Here are some of the boring, unimaginative sample ads from the campaign's pitch deck:

Holy helvetica! I can't wait to see all the convention and tourism business that will drum up for the new OKC Convention Center:

"Wilson, where should the company have our next big convention?"

"How about Oklahoma City, sir? It was created in a single day!”

You don't have to be one of Don Draper's secretaries to know that "Imagine That" is a boring slogan that lacks originality and creativity. In fact, the slogan is so unoriginal that the Oklahoma City Chamber of Commerce, via the Convention and Visitors Bureau, used it back in the early- to mid-1990s as part of a self-deprecating ad campaign to recruit convention business.

Check out this old print ad that was sent to us by an Ogle Mole: 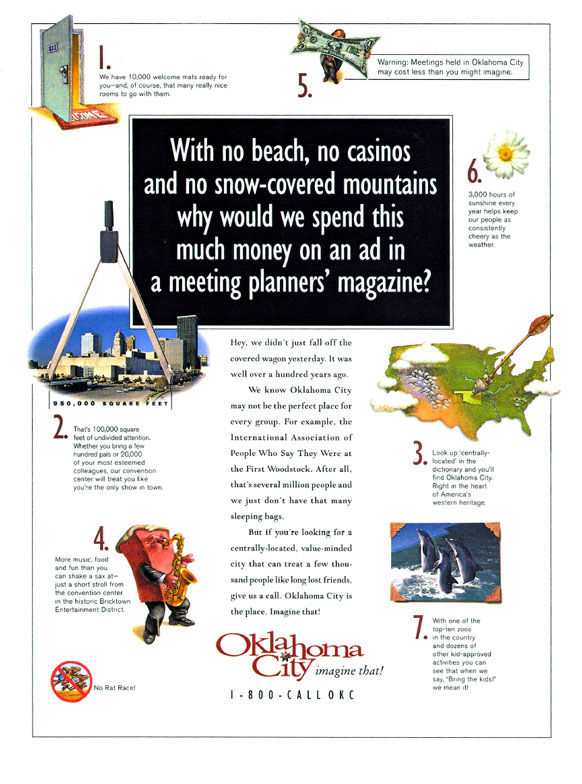 If you need a reminder of how much Oklahoma City has changed over the past 25 years, zoom in on that ad copy. I think it was written by Eeyore and won a 1994 Regional Addy for "Most Sad And Brutally Honest Print Ad Campaign."

That being said, I do like the cartoonish brick playing the saxophone like it's a California Raisin. While we're regurgitating old ideas, maybe the Bricktown Association should use it as a mascot!

I have no clue if the dual use of "Imagine That" is a simple uninspired coincidence, or if the powers that be were intentionally using a campaign that ended around the same time the unimaginable did happen in Oklahoma City. The people involved in the Okla-X re-brand project aren't sure either.

After our story published, I talked to numerous Ogle Moles who are part of the Okla X team. They claim "Imagine That" was not included in any presentations or pitches, and that it seemingly dropped out of micro-managerial left field like a CEO wanting to make the logo bigger.

In fact, their reaction to the slogan and campaign kind of makes me wonder if the whole Okla X process was nothing more than a dog and pony show put together to make the local ad industry feel connected and part of the process, when in fact, their input really didn't matter all that much.

Anyway, I'm still hearing that "Imagine That" will be unleashed to the masses in February. Once again, that is if Governor Stitt and Lt. Governor Pinnell don't do an about face and go back the drawing board due to broad negative feedback. If that happens, expect the next state marketing slogan to be "Uninspired Ideas. We're On It." to be released in March.

1Comments
Louis Fowler
February 2, 2023
Everything Else