Ranking the items in the Oklahoma State Meal…

Oklahoma isn't really looked at as a food state, but we've actually got some damn good grub here. Sure, none of our best offerings are good for you, but somebody has to be the third highest in adult obesity in America.

We all know about the ridiculous Oklahoma State Meal by now. Hell, there's even a restaurant in the Plaza District – The Press – that offers it all, but just in case you forgot, here it is:

So, how do all of these foods rank when you put them side-by-side?

After about twenty minutes of deliberation, I've come up with a power rankings of the dozen foods that state legislators once decided belong on the table of every Oklahoma family. The metrics are based on what you would actually want to order at a restaurant, which foods would get eaten up first at a potluck, and their unique Oklahomaness.

Fight about it in the comments. 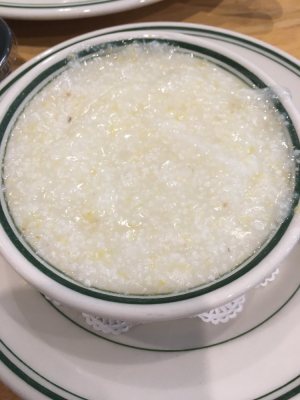 Grits are fine. I'll order them occasionally at a diner, usually out of this misguided idea that I'm a southerner and that's what we eat. But Oklahoma ain't the south, and grits taste like nothing. They're a chewy vessel for butter, black pepper, and hot sauce, but so is everything else on my breakfast plate and all the other things taste better.

This is a honorary mention, as it's not actually on the Oklahoma State Meal, but is still our State Vegetable. I'd rather eat it than other things on this list because it's delicious and refreshing, but not technically part of the State Meal. Also, watermelon tends to be gritty, and the seeds are a pain in the ass but only creeps get seedless watermelons so it's a painful paradox.

I've never ever seen black-eyed peas except on New Years and it's a thing everybody eats out of superstition instead of an intentional side dish that they enjoy. They're traditionally cooked with a bunch of pork fat, which signals that either no one knows how to cook them, or that black-eyed peas just kinda eh and need piggy meats to make them interesting.

This was the hardest decision to make, because if you've had fresh, homegrown strawberries at the peak of summer with whipped cream, there are few finer pleasures. However, strawberries are kinda like tomatoes in that the mass-produced ones you get from a grocery store or restaurant tend to be mealy and flavorless. Sorry, strawberries. I really do love you, but you gotta get the shaft on this list.

Squash is really vague, since it encompasses a variety of gourds. There's a lot of them, but my mind immediately goes towards summer squash, which can be either a soggy mess, or crunchy and delicious. It's perfect on the grill for kabobs or in late summer pasta primavera. Like many veggies of its ilk, it needs a good chef and judicious seasoning, but it's hearty enough to have sustained Oklahomans throughout many rough growing seasons.

This one is a shocker to be so low on the list, but I'm usually more disappointed than titillated with bbq pork. Pig is maybe the tastiest animal when prepared with care and respect, but so many smokehouses in town will just dry it out and let their sugary barbecue sauces compensate, masking the flavors of a delicious, fatty animal that's as smart as your household dog, and it seems like such a waste.

We're punting on corn here. How is the corn cooked? We talkin' that Jolly Green Giant right out the can? Fresh cobs grilled with butter and salt and cayenne or Old Bay? The taqueria classic, elote? I don't have enough information here to put corn anywhere else on the list but the middle, but maybe that's where it belongs anyways.

See, here we have a corn dish that is specific. Cornbread can be mediocre, but even mediocre cornbread is still pretty good. Every time I bake it at home, I try a new recipe. I haven't found the perfect one yet, but it always gets eaten quickly.

This was another difficult one, because it's unofficially part of the official Oklahoma Breakfast. Gravy is delicious and the best friend to sausage. But would you feel comfortable just eating it from a bowl, as suggested by it's inclusion into the Oklahoma State Meal? Nobody here will judge you, but there needs to be another component. It's not a stand-alone dish. Speaking of which...

Ah yes, biscuits! The peanut butter to sausage and gravy's PB&J. Gotta have something to sop up all the juices from these other dishes, and what better accoutrement than a fluffy, buttery biscuit? This, like cornbread, has such a simple chemical makeup that they can go from bad to bougie with minor changes in their ingredients. Poorly made biscuits are still biscuits, though, and even the canned ones from the grocery store are better than just about anything on this list. (By the way, if you have a perfect flaky biscuit recipe, please share in the comments because, like cornbread, I'm still on the hunt)

It's just sugar, flour, butter, and nuts, and even the most gross, processed pecan pie still tastes like nostalgic bliss.

Fried okra is a side option at just about any self-respecting Oklahoma greasy spoon restaurant, and if you order anything else, you feel foolish immediately. Okra usually needs a little TLC to ensure it's not too slimy or hairy or fibrous, but battered and frying it is the Occam's Razor that makes the hearty vegetable perfect. If I ever found myself on death row and had to come up with a bonkers last meal with milkshakes and lobster and a Wagyu steak, you'd better believe that fried okra would earn some space on my plate.

2Comments
Sierra
January 26, 2023
Everything Else

5Comments
Patrick
January 25, 2023
Everything Else

3Comments
Patrick
January 25, 2023
Everything Else