It started with 65 local personalities vying to be Oklahoma's number one celebrity.  Now we are down to four...the Ogle Madness II Final Four.  This prestigious foursome includes:

"¢ A hot blonde who can sing

"¢ A guy who can throw a football

"¢ A pretty good politician, and

"¢ A hot blonde who can sing

I guess this proves what we've always known:  Oklahomans like hot blondes, football and politics.   And if they can sing, it's simply a bonus.  Anyway, today's matchups are between:

Voting lasts until Midnight tonight.  To see how they got here, check out the updated bracket. 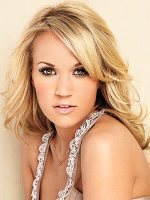 Biggest Strength: Getting the NBA to come to Oklahoma City

Biggest Weakness: Getting us a Cardboard Mick to play with Cardboard Jim

Who she is: Olive Snook on Pushing Daisies, G'linda the "Good Witch" in the musical Wicked

Biggest Strength: For our lady readers, we'll say her singing voice, great line delivery, and smile.  For our male readers, we're going to go with her giant rack.

Biggest Weakness: She is not quite a midget, but it's close.

2Comments
Patrick
December 2, 2022
Everything Else