Today's Elite 8 battles come from the South and West Regions.  The winners of these two games will join Sam Bradford and Carrie Underwood in next week's Final 4.  The South Region has played very true to form with the 1 and 3 seeds advancing.  The West Region, though, has been the story of the tournament with the surprise run by 9-seed Kristin Chenoweth.  Has the clock struck midnight, or does Cinderella have one more upset in her?  Here are the previews: 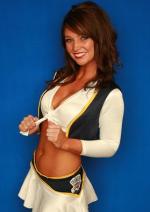 Along with Clay Bennett and his rich friends, Mayor Mick was one of the most influential people behind the NBA landing in OKC.  That's why there is a bit of irony to the fact that he's going up against the the Thunder Girls for a berth in the Ogle Madness Final Four.  We know having an NBA dance team in town was one of the mayor's dreams, but how will he feel if his home town's NBA dance team blocks his advancement to the Ogle Madness Final 4?  Good question, huh? 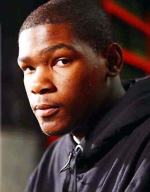 The odds makers figured Chenoweth would have an easy time against Jenni Carlson, but who would have ever predicted the dominance she displayed against Ogle Madness I finalists Amy McRee (the runner-up) and Lauren Richardson (the champion) in back-to-back games.  It will be interesting to see if she has what it takes to beat the silky smooth Kevin Durant, who's already shown enough of a game to sneak out a close one against hot girl Ashlynn Brooke.

Anyway, vote after the jump.   Voting is open until midnight tomorrow.

Biggest Strength: Getting the NBA to come to Oklahoma City

Biggest Weakness: Getting us a Cardboard Mick to play with Cardboard Jim

Who they are: The dance team for the Oklahoma City Thunder

Biggest Strength: Dressing sluttily and gyrating to music in front of thousands of people

Biggest Weakness: Having the audacity to destroy Clark Matthews in round 1 of Ogle Madness

Who he is: Basketball Robot

Biggest Strength: Lighting up opposing defenses on a nightly basis.

Biggest Weakness: We'd say defending, but he generally goes up against the worst offensive player on the other team.  So instead, we'll say showing a personality of any kind.

Who she is: Olive Snook on Pushing Daisies, G'linda the "Good Witch" in the musical Wicked

Biggest Strength: For our lady readers, we'll say her singing voice, great line delivery, and smile.  For our male readers, we're going to go with her giant rack.

Biggest Weakness: She is not quite a midget, but it's close.