Having fun with the Capital One Card Lab…

A few weeks ago, someone alerted us to the following story from The Smoking Gun.  It had to do with Nick Nolte, a Capital One Credit Card, and a funny guy from Ponca City.

What's in your wallet? Well, for a couple of days this week, the billfold of an Oklahoma man contained a Capital One credit card bearing the iconic Nick Nolte mug shot. Taking advantage of the bank's offer to personalize your plastic with a favorite photo, David Mackie, a 35-year-old salesman, recently went online and submitted a card design featuring the disheveled actor's September 2002 booking photo. Surprisingly, the bank--whose internal controls might merit a review--quickly replied with an e-mail announcing, "Congratulations! Your image has been approved." Capital One subsequently realized its error, but not before the Nolte card, seen below, had already been mailed to Mackie's home in Ponca City in northern Oklahoma

When I read this story, my first reaction was to go to the Capital One website and create an Amy McRee credit card using Kelly Ogle's identity.  Clark Matthews then notified me that this was illegal.   Since I don't feel like going to jail and/or adding another credit card to my impressive credit card debt portfolio, I figured we'd create some potential cards that our readers could make using Oklahoma-ish images from the internet.  A couple of examples are below, the rest are after the jump.

This is a great card to show your support for a fledgling NBA sideline reporter, an amazing Cardboard cut-out, and a news anchor who should donate his salary to an important foundation.

This is the perfect card for the Scout master in y0ur family...or the person who's a fan a vintage political comic book memorabilia.

This card will frighten most everyone who sees it...except for Tony Sellers and hard core lesbians.

This card is excellent for college baseball fans, heterosexual men, or both.

Oddly enough, we are pretty sure that Berry Trammel already owns this card.  He also owns bull feathers.

This card is in honor of The Irritated Tulsan, drunk driving and shitting your pants.

This card is just in honor of shitting your pants. 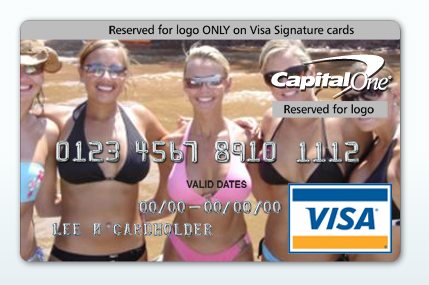 Yeah.  You didn't think we'd forget this one, did you?

Anyway, that's the list.  If you have some good cards, send them to us at The Lost Ogle at gmail dot com.  Have a merry day.