Just like most mask mandates, we're finally at the end of our ranking of the Top 25 Oklahoma Covidiots.

We'd like to thank all of our state's finest covidiots for making this countdown possible, and providing so much content to us – and the entire news media industry – over the past 14 months or so. If you didn't make it this go around, don't worry – with so many Oklahomans saying "No Thanks" to vaccines, and with variants of COVID still spreading around, there's a chance we could have a new batch of Covidiots to honor next year.

The rankings are below. View the rest of the countdown here:

Wow. Check out this video of a woman throwing shoe boxes at an employee for asking her to wear a face mask (store policy). This happened at the Sketchers off Memorial and Penn in OKC.

The woman apparently left her wallet at the scene...which was given to police. pic.twitter.com/FCgjO2HbTO

One local Karen fought against the tyrannical terror that was the Oklahoma City mask mandate by tyrannically terrorizing the employees at the Penn Sketcher’s store. When asked to wear a mask, this mulleted marksman chucked some Chucks in a fit of rage before leaving the store—and her wallet and ID behind.

While hunkering down to hide from the mob that stormed the Capitol on January 6th, esteemed lawmaker and likely Rocky Balboa fan-fiction enthusiast Markwayne Mullin was caught on camera refusing to wear a mask while sheltering with other congresspeople. Markwayne claimed his decision to not wear a mask wasn’t political. Rather, his decision appeared to be motivated by selfishness and stupidity.

The Broken Arrow City Council opted to keep the community “open for business” by honoring residents’ individual freedoms to dine inside of restaurants, decline to wear masks in public, and spread COVID-19 like mayonnaise on a Love’s Truckstop ham sandwich. To their credit, a few weeks ago the Council finally passed a non-binding mask resolution that encouraged citizens to wear masks…after the city already had 15,601 confirmed cases of COVID.

At the beginning of the pandemic, David Green circulated a memo to employees thanking them for the hard work that made Hobby Lobby a success and reassuring everyone that his prayer warrior wife Barbara was pleading for God’s blessing. Less than two weeks later, the multi-billion dollar company laid off multiple employees. Some say God works in mysterious ways; but the Green family works in selfish ways. 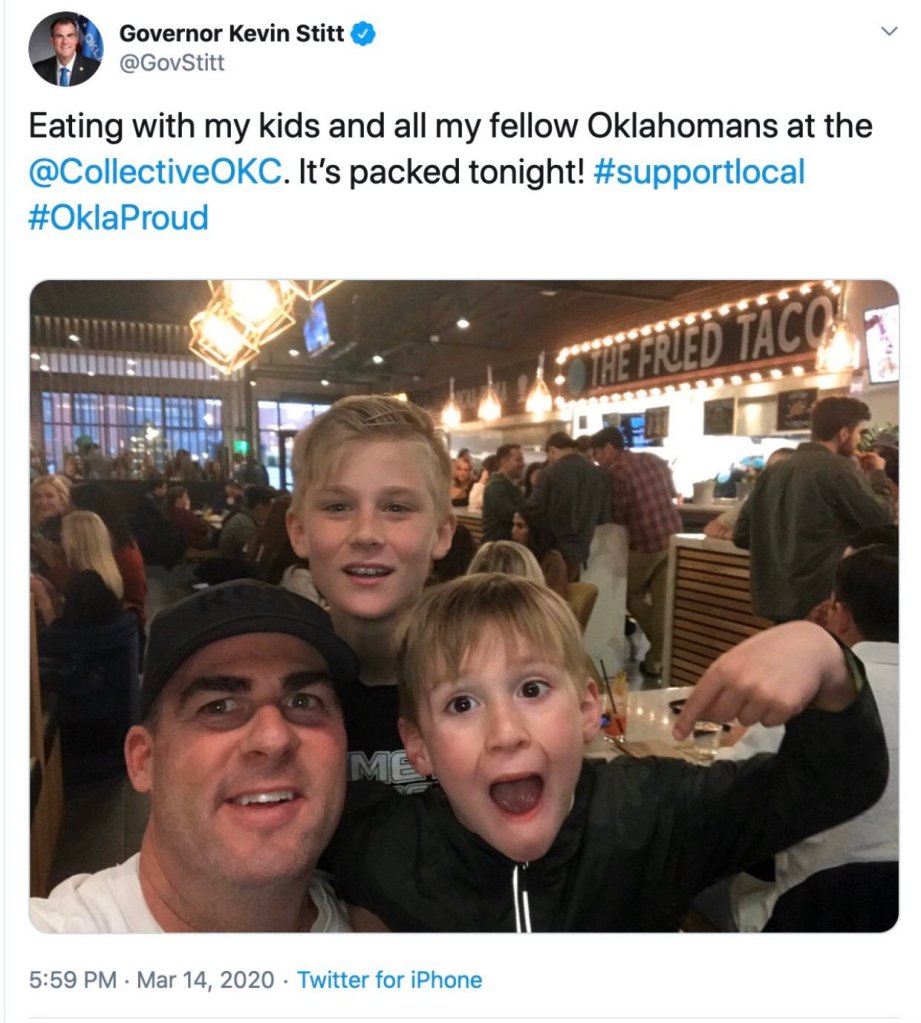 No surprise here. He refused to implement a mask mandate, hardly ever followed his own “personal responsibility” initiative, never rolled back statewide restrictions when COVID cases skyrocketed, advocated for travel to the state during the goddang global pandemic, and spread misinformation about the state’s readiness for the pandemic. Kevin Stitt has done his part in making Oklahoma a top 10 state for COVID-19.

Who'd we miss? Let us know in the comments, then follow Hayley on twitter @squirrellygeek and become a contributing member of TLO here.

In my spare time, I officiate secular weddings, read about dead people, and search for the American Dream.