Since we're about to change our state's name to "New Minnesota," I thought I'd address an epidemic that's destroying our state: Awful Winter Weather Photography.

You know what I'm talking about. You wake up to three to five fresh inches of snow on the ground and your backyard looks like a pretty winter wonderland. You let the dogs out and they start playing and, oh my god, look at the snow on the patio furniture and the birds in that tree. And then it happens. Out comes the phone. You snap a couple of pics and post them to Facebook, Instagram or Twitter. Then your aunt or friend from college you haven't seen in years "likes" them and you feel all warm and happy, despite the fact you annoyed every one of your friends and followers with some boring, annoying "photography".

If you're one of those people, don't feel too bad. Everyone does it. Unfortunately, that's not where the madness stops. Some people actually send those pics to TV news stations. Amazingly, the news stations don't seem to mind. In fact, they encourage it. They ask for readers to submit photos and then put them on the air and call it news. This prompts people to take and send more pics, creating a vicious cycle of winter weather madness that's got to stop.

Seriously, this craze of sending camera phone pics of snow to the TV news media is out of control. It's become the "Live Report from the Icy Intersection" shot of the 1990s or "School Closings Scroll" of the 2000s. Pretty soon, the TV news media is going to try to cram all this stuff on one screen. They'll have the school closings scroll on the bottom, with the rest of the screen divided between live radar, stormchaser dashboard cam, lazy reporter at Britton and I-235 bridge with ruler cam, Bob Mills Integris Winstar cam, and a slide show that rotates awful viewer submitted winter weather pics. Actually, I think News 9 already does that, so never mind.

Anyway, I stopped by the News 9 Facebook Page and rounded up the 10 most annoying types of pics people send to news channels or post on Facebook or whatever. These account for 99% of all winter photographs. Please do us all a favor and put the phone down and stop. Nobody cares. I repeat, nobody cares.

This is one of the most common pics. What happens is Emily Sutton will say something on air like "Send us your snow totals in Wetumka!" and then people rush outside and take these. They're pretty awful. Wow. Four inches of snow. I hope you're okay.

I love dogs. Let me rephrase that. I love my dogs. Your dogs are just okay, and look like every other dog out there. Even though they're cute as hell, I don't need to see 5,000 pictures of them wanting to go inside.

Pics of kids are a lot like pics of dogs. Unless it's your kid, grandkid, niece or nephew, nobody cares. In an odd way, it's kind of weird how similar kids and dogs are. The only difference is dogs are more loyal, cheaper, obey commands, and won't take your job when they're all grown up.

To answer these News 9 viewers' questions, obviously the burning snow is all part of a vast conspiracy by the US Government to poison its people. It has nothing to do with a naturally occurring phenomenon or anything.

Pretty amazing, huh? A tree... with snow falling... in the wintertime. You only see thousands of those each year. If Robert Frost wrote a poem about all these tree pics it would be called "Winter Vomit."

I was surprised by the amount of people who posted pics of birds. Do people not realize that just like any other animal, birds occasionally have to live and adapt to snow? Unless the bird is big, yellow and can sing and talk, please don't post it to Facebook.

Okay, I'll even admit that one of the longhorn bull is pretty cool, but the other ones are all boring and identical. In fact, they make me want a hamburger. Stop it.

(Update: Apparently the longhorn bull is a female yak. At least it is according to all the OSU students who left comments. I honestly have no clue.)

(Update 2: It's not a yak. It's Scottish Highland cattle.)

If you're going to post a boring picture of your backyard, at least do us all a favor and have the decency to clean it up first. Or better yet, have a cool backyard like this person:

By the way, never trust someone who has an alligator statue in their backyard. They're probably a drug dealer or Mathis brother.

You knew this was coming, right? This is probably the worst type of winter weather photograph. If you do this, I hope all your furniture gets blown over during severe storm season. 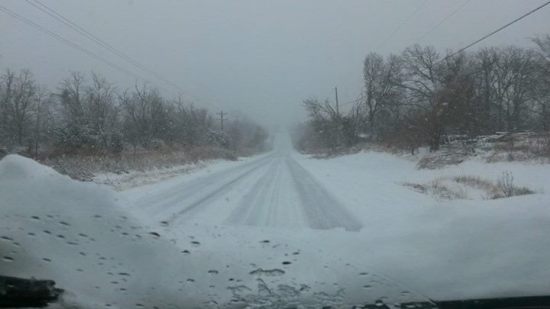 "Hey, what if I took a picture with my phone while driving around on slick roads! What a stupid thing to do, huh?"

That's it for our list. Apologies go out to "Cars in Ditches" and "Frost on Windows." They barely missed out. Couple of final notes:

• Please share this on Facebook so the people who post all these pics will realize what they're doing and hopefully stop. It will make this world a better place.

• The girl in the bikini is a TLO reader. She sent it to us a year or two ago. If you're a girl who is bored and wants to make TLO, there's your chance.