Sure, there’s a whole Bricktown’s worth of economic stimulation and pages and pages of recognition from major media outlets covering the Thunder’s run of cultural dominance in Oklahoma City. But I’m pretty sure I speak for all of us when I ask why the New York Times and Los Angeles Times aren’t willing to tackle the big questions, like What effect has the Thunder’s success made on Oklahoma City’s public rap game recognition?

Prior to 2010 or so, hip-hop stars (and hip-hop B- and C-listers) name-checked OKC with about the same frequency that they name-checked professional bowlers*, but Kevin Durant’s three-year grip on the NBA scoring title’s drastically increased that output. Rappers who rely on the Internet for self-promotion are notorious trendjackers and rappers rapping about the NBA (and NBA players rapping — remember Shaq Diesel? And Shaq Fu: Da Return?) aren’t exactly at the forefront of their field. But it’s pretty new to us in flyover country to hear something about the hometown over a beat and not an acoustic guitar, so I’ve put together this playlist-icle of rap songs I found in a few hours spent wading through YouTube, RapGenius, and the endless bog of rap blogs that name-check anything Thunder-centric. And yes, I was just as amazed and delighted to hear Hasheem Thabeet’s name in a rap song as anybody.

I start with “Not Told” just because Roc Marciano is one of the few artistically wholly respectable rappers here and his mention of Russ’s freakish leaping ability is actually poetic to the avid sports fan. It avoids mere cheesy namechecking and evokes all my memories of watching awestruck as Russ consistently challenged Tyson Chandler for rebounds in the 2011 Western Conference Finals. But yeah, in terms of artistry, technicality, and poetics it’s pretty much straight downhill into rapper stereotype territory from here.

Alright, having peaked at #36 on the Billboard Hot 100 and #2 on the Rap Songs chart, here’s the biggest hip-hop hit to mention OKC to date. You should probably not listen to “Pop That” right now if...

A. any of the typical yacht-rap contrivances offend you, because this video and song exploit them all liberally.

B. you don’t want to get really excited and hyperactive in the next five minutes because listening to this beat through even a pair of conventional headphones will make it seem like smashing your fist through your cubicle wall is a really good idea.

If you recall, Drake (who actually says the line about KD and OKC) ran into a little legal trouble the last time he played a show here, so it’s interesting that that apparently translates to mean “player shit” in Drake’s weird little self-obsessed world of VIP sections and window-tinted, groupie-loaded SUVs.

Like myself, Josh lives here after growing up in the Tulsa area and it’s been a pleasure to watch his skills and career steadily grow. This song definitely listens kinda like the Gazette’s Chicken-Fried News section: self-aware of our home’s less-flattering attributes without being overly self-deprecating. That line about how “both coasts think we don’t use computers” always really gets me.

This one’s worth including less because it’s an overwhelmingly great rap and more so because it’s just cool to see kids (Mr. Nehru here says he’s 15) growing up with KD the same way I grew up watching Michael Jordan play. I don’t think it’s hyperbolic to say that Durant’s career is probably going to influence a whole generation of young people.

OK so this one’s kind of a cheat ‘cause no explicit reference to anything about the Thunder is made, however I included “Hustlin’” because it’s an implicit appraisal of the hard-nosed, workmanlike game of one Nicholas John Collison, backup power forward and all-around awesome dude. The above supercut surfaced shortly after Collison joked about a Rick Ross-soundtracked video of his best screens, putbacks, and drawn charges, and it could not be more perfect. I mean look how hard it amazed Marc Gasol: 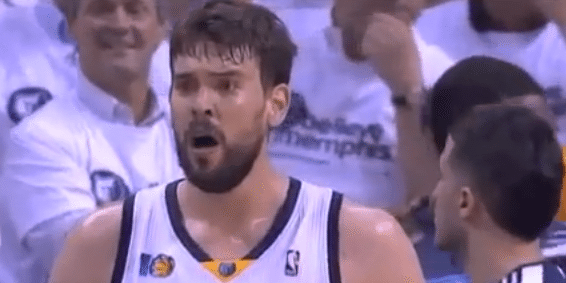 Yep, the 7’1” Spaniard is clearly distressed. Let’s pan in a little closer on that mug to confirm. 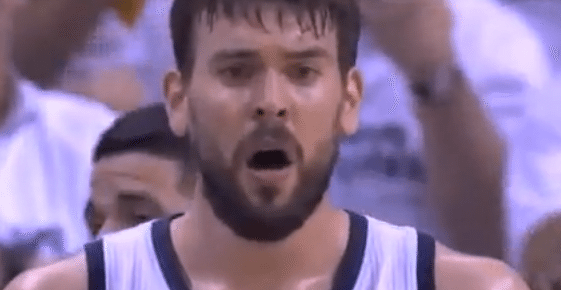 Now he’s looking side-to-side as if he is the last sane man on Earth.

Also, I was sure to include “Hustlin’” because nobody’s ever rapped explicitly about Nick Collison:

I will not rest until Nick gets his due. But for now we must forge on.

played on the team now I’m coachin’ like Mo CheekS

Beetyman’s another local with a lot of skill, and he won me over really easily when he name-checked the Thunder’s former all-star assistant coach on his 2011 album Underdog. Awesomely enough there’s another song by a couple of little-known dudes called 7L & Esoteric in Boston whose “Watch Me” shouts out to Mo Cheeks as well.

7. Trinidad James — “Gold on My MacBook”

Too soon for a Harden mention? Yeah you’re right. Sorry.

I’m verified, give me my stamp
I’m underrated, K. Durant

Young rappers like Meek Mill who’ve greased fast-moving, ephemeral rap blogs with mixtapes on their way to major-label contracts have been more prone to writing raps that turn into antiques really quickly like this. In fact the “verified” reference to Twitter is pretty telling too, now that I think about it. In Meek’s defense there weren’t a ton of people outside of OKC regularly watching the Thunder way back in 2010 (at least compared to now) so this reference made sense then. Oh look how far we’ve come.

**WARNING: May be too graphic for those who still suffer 2012 Finals nightmares**

I’m Game 5 LeBron, stealin’ the thunder from Sefolosha
killin’ Durant then I go so H.A.M. that it ain’t kosher

If “kosher” is what it takes to rhyme Thabo’s last name into a verse then I’d normally be all for it. But it’s in service of the “going H.A.M.” line that’s just so corny now, so I’m vetoing it. Also, let’s face it, Thabo would never dream of putting the ball on the court with LeBron defending him anyway. Implausible, Chanda!

and I just give ‘em D, I give ‘em D like they is out the league
Hasheem Thabeet and various other people
the pressures of greatness always come with critiquin’

Wow, a Hasheem Thabeet reference that not only resists the obvious drug reference but also avoids sounding really clumsy? Give Wale a gold star, even if the rap’s dated.

Nike backpack on, you know like Durant be wearin’

It’s in the spoken intro, but hey! Even KD’s backpack gets a shoutout!

*Off the top of my head, Kanye West’s “Gone” is the last big-name hip-hop artist mention of Oklahoma, but that song wasn’t a single and it’s pretty clear that Kanye’s attitude toward it is that it’s a place for him to go to hide from the spotlight. Not exactly flattering.

Matt’s on Twitter at @okmattcarney and writes the pop music column for LOOKatOKC every two weeks. His appreciation for Nick Collison has been described as “unhealthy,” by close personal friends and diagnosed as “bordering on psychotic” by licensed psychiatrists.