The girl pictured above is Tiffany Tatro. She's the new morning reporter for KOKH Fox 25. She's apparently been on the job for a few months, but we didn't know about it because we use all of our free time shopping, traveling and spending time with friends and family. Fortunately, though, an Ogle Mole alerted us to her presence.

Here's her bio over at the terrible Fox 25 website.

Multi-media journalist, Tiffany Tatro, is a reporter for Fox 25 Primtetime News. Before arriving in Oklahoma City, Tiffany worked as reporter for KTAB, the CBS affiliate in Abilene, TX. There she covered a variety of stories from the massive wildfires to tornadoes. Tiffany also covered a high profile missing person case that led to a live appearance on CNN Headline News.

Born and raised in Phoenix, AZ she's excited to see what the Sooner State has to offer. Tiffany graduated from Arizona State University. While she loves her Sun Devils, she is excited to cheer for OU and OSU!

When not working Tiffany enjoys shopping, traveling and spending time with friends and family.

Tiffany is looking forward to exploring OKC and meeting all the great people.

That's neat. Did you notice the part about Arizona St? If I could go back in time and change anything about me or my life, I'd try to figure out a way to be tall and athletic. If that didn't work, I'd just make sure I enrolled for a semester of college at ASU. The girls there are wild and crazy and usually attractive. They also do things like post pictures like this on Facebook: 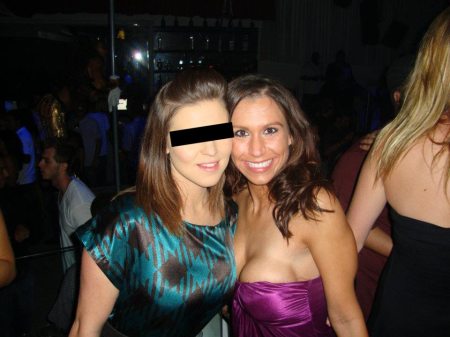 Holy Tatros! I don't know about you, but I think Channel 25 has finally found their answer to Lauren Richardson. They need to get Tiffany to Braum's and have her make an ice cream cone immediately!

That top pic officially joins the old Amy McRee pink bikini photo and the Boleen Chiller laying watermelons thing as the hottest images of a local news girl that was swiped from the Interwebs and published on The Lost Ogle. If Tiffany can make it to a news station in Oklahoma City that people actually watch, we may bump it up to number one.

Anyway, we're happy that Tiffany is in Oklahoma City and we hope to run into her at any local club or White Water. That being said, our happiness is probably balanced out by Jamie Cerreta's despair. She's had "the hot girl from Arizona with the large, uh, eyes" market covered in this town for quite awhile. Not only did her own employer bring in a newbie to rival both of those achievements, but the new girl's also younger. Expect Jaime's talent reel to make some news employment website any day now.

4Comments
Patrick
November 24, 2022
Everything Else