Looks like some local radio “stars” got their pictures taken…

You may remember Lisa Monahan.  She was a news anchor and reporter for Channel 25 (she even made our "20 Hottest" list a couple of times), but gave it up a few months back so she could pursue a career in photography.  Her business is named, get this, "Lisa Monahan Photography."

The early results from Lisa Monahan Photography were pretty good.  However, she wasn't taking the most challenging photos.  Her first few were of Jaime Cerreta posing against a wall and Jamie Cerreta wearing a tight green shirt and Jaime Cerreta sitting on concrete with an arrow pointing towards her.  I mean, they were good photos and everything, but even I could shot those.  I would have even done it for free.

Well, earlier this week I noticed something on Facebook which may be a sign that Lisa is turning the difficulty meter to 11.  On her photography studio's Facebook page she added an album called "Oklahoma City Radio Faces."

Anyway, the caption for each collage said "do not crop, copy or alter image. (c) Lisa Monahan Photography," but that's exactly what we're going to do after the jump.  We're also going to make jokes, criticize and provide commentary.  Isn't "Fair Use" great?

1. "Yeah, I have no clue how I still have a job either.  I've been mailing it in for years."
2. "I thought Dean was bringing the hookers."
3. "Honestly, I thought we were supposed to wear swim trunks."

I'm not sure who this guy is.  I think it's either Cisco, Frito or Burrito, but I do know that he works for that station that still plays In Da' Club in heavy rotation and caters to the City Walk crowd.  I also know that he looks like the type of guy who you wouldn't want to see coming out of the bathroom after you've been waiting in line for 10 minutes.

That's Joey from the "Joey and Heather Morning" show.  Here are some things you may not know about Joey:

1. He's one of the best Golden Tee "Golfers" in Oklahoma City

2. The last time he went to see his stylist he showed her a picture of Justin Bieber and Greyson Chance and said "Something like that."

3. That's the same smile and pose he gives right before some 12-year-old kid steals his lunch money.

Whoa, we have a winner!  That there is Lauren Craun.  You may remember Lauren from this year's rankings of the 20 Hottest.  She came in at number 12.

I have a tip for Lauren.  It's called television.  Look into it. 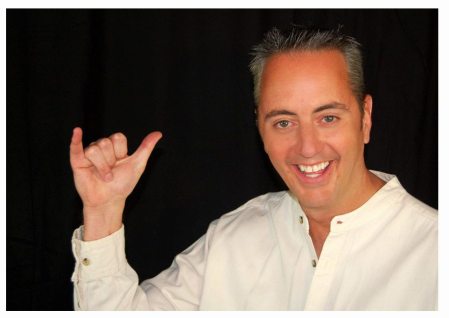 This is Ron "Spinozzi" Benton.  I think he just won the award for least convincing use of the hang loose sign in the history of the human race.  Seriously, he looks like he should be making that sign while riding a moped around your neighborhood.

Speaking of mopeds, I think this is Spinozzi's sidekick on the BOB FM Morning Show. His name is Shannon or the Eggman or something like that.  I think that's the same body expression he gives whenever a police officer finds him within 300-feet of any school or park.

In honor of Jack and Ron, I'm not going to write anything funny, clever or original about them or their photograph.

I'm not sure who this is a picture of, but I think it's Jake Daniels with the KATT.  Or it could be some really confused out-of-town'er who's looking for either the Stockyards or Habana Inn.  One of the two.

That being said, when did Jim Traber begin working on a Barry Melrose mullet?  Is he auditioning for the Sopranos?

Well, obviously we know what Dean Blevins is thinking about.

Anyway, those are just a few of the pictures.  If you want to see them all and make observations about them on your own, just go to the Lisa Monahan Photography Facebook Page.