Here are the match-ups for the lower half of the Midwest bracket.

Basically, this is Kristin Chenoweth's to lose.  She was the champion of Ogle Madness II, and not making the Sweet 16 would be a huge disappointment.

Vote and all that good stuff after the jumpity jump.

Who he is: Head coach of the University of Oklahoma Football team 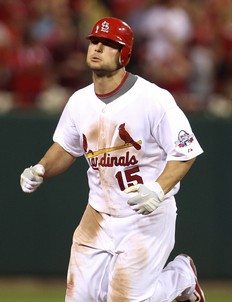 Who he is: All-star outfielder for the St. Louis Cardinals

Who he is: Evening Anchor for KWTV Channel 4

Who she is: Contributing writer for The Lost Ogle

Biggest Strength: Using the phrase Gentle Readers and informing Oklahomans about stuff to do on the weekends.

Who she is: Evening anchor for KFOR Channel 4

Biggest Strength: The ability to communicate subliminally with people through the television.

Who he is: Sports Director for KWTV Channel 9

Biggest Strength: Telling Toby Rowland what to do.

Biggest Weakness: Not coming off as a prick.

Who she is: Actress, Author and Singer

Who he is: Some dude from Tulsa

Love’s makes cameo in The Last Of Us…