I think it's safe to say the 2009 Norman Music Festival was hit.  Attendance exceeded expectations, the weather was perfect, we had press passes, and for the second year in a row, Cardboard Jim took to the streets and mingled with the crowd.  This time around, he also brought his friend and colleague Cardboard Cornett. Yes...it was a cardboard extravaganza.

After the jump, check out a bunch of the pictures we took of Jim with the hippies, hot chicks, shirtless boys and chicks from Wimgo that the mean Wimgo guy told us not to take pictures with. Be warned that since there are a bunch of images, it may take a while to load.  Enjoy.

Cardboard Jim told these yardbirds what it's like to be a big time radio star.  Cardboard Cornett told them about Bob Cortese.  The guy on the right starred in Rushmore and is in the band Coconut Records.

These girls were impressed with Steve Hunt's handy work.

This is why Regular Jim Traber breathes so heavy when he is on the radio.

The guy wore a "It's Always Sunny in Philadelphia" shirt in hopes that he could be a "Of Montreal" groupie.

These outstanding individuals were very impressed that Cardboard Cornett came all the way up from Oklahoma City to attend the Norman Music Festival.

Right before he cleansed the cardboard colon, the dominate duo made these friends.

The boy in brown has very long hands

This picture was taken before the mean dude with glasses from OPBUCO got mad at us.

The real question is what is the guy doing behind Cardboard Jim?  Maybe that explains some things. 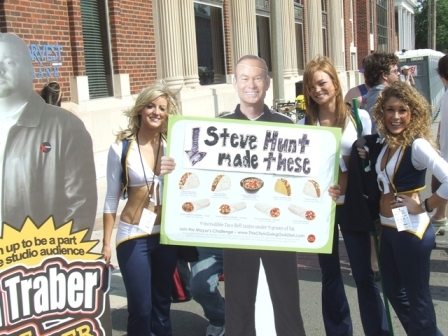 For some, reason Cardboard Cornett and the Thunder Girls disappeared after this picture.  They said they had to go to Oklahoma City to take care of important business.

And one final distraction.  After this, he was good to go.

Cardboard Jim was pretty sure he had seen these guys before.  He thinks it may have been at Lake Hefner.

This guy was hiding from the man behind them.

This guy and Cardboard Jim were dancing to the loud and annoying tunes of "Man Man."

These were Jim's homeboys from back East.  They hadn't seen Jim in a long, long, long time.

The girl on the right had big earrings.

This picture was also taken before the mean dude with glasses from OPBUCO got mad at us.

The girl in the pinkish redish orangish dress ended up being pushed to the ground by her excited friends.  The creepy guy behind them helped her up.

This guy kept demanding that we give him Brent Skarky's phone number.  We told him that Regular Jim Traber knows Brent Skarky.  This satisfied the guy.

This guy told Cardboard Jim that he was a big shot ad agency guy and that Ackerman McQueen sucks.  He also said Renzi Stone likes to be tickled.  Just kidding, he didn't say either one of those things...or did he?!?

The second best part of this picture is the beer sign floating at the top.

This guy claimed to write for either The Red Dirt Kings or Gossip Boy OKC.  Or that may have been some other guy.  That's what I get for drinking while working.

These yardbirds invited Cardboard Jim to go to the roller derby.

For some reason, this guy was excited to see Cardboard Jim.

These picture reminded Jim of when he and Cal Ripken would hang out in their underwear. 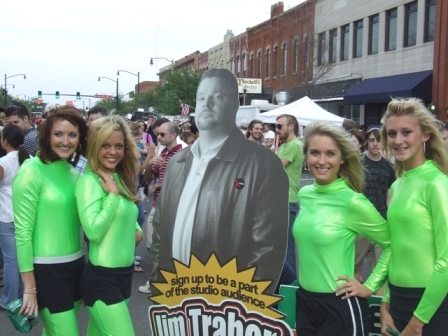 When we saw these strangely dressed Wimgo girls, we quickly darted towards them to get a picture.  As we were getting the picture organized, some mean little guy with glasses who was wearing a Wimgo shirt told the girls to not take a picture with us.  I asked him why, and he said "Because you will make fun of us."  I then told him that we wouldn't post the picture and they we wouldn't make fun of them.

Anyway, I guess I lied on the "not posting" the picture part, but that's what they guy gets for being a douche bag.  However, I didn't make fun of them.  I let the picture do that.

So there you have it:  the newest installment of the Travels of Cardboard Jim.  If you didn't see your picture, or want to see more pics, we will be posting a whole lot more on our regular Facebook Page and our Facebook Fan Page.