We've learned via the Ogle Mole Network that Kyle Hill – the owner operator of Kyle Hill Kia – is facing a civil lawsuit in Oklahoma County for "civil assault battery" and "intentional infliction of emotional distress."

The lawsuit, which was filed in October, stems from a previously unreported incident that took place in the early morning hours of January 20th at Bin 73 Wine Bar in Nichols Hills.

According to a police report, Hill got in a fight with a customer in the bar's parking lot. When Hill returned to the bar, he proceeded to get into another altercation with another drunk patron. That's when Pennington, the bartender on duty, intervened and attempted to calm down the situation.

I guess you can say that plan backfired. Hill – a former OU football player – grabbed a beer bottle from the bar, walked towards Pennington, grabbed him by the throat, and pushed him against the bar until other members of the staff intervened.

The cops were eventually called and Hill was arrested for assault and battery charges on Pennington. According to this document, he entered a no-contest plea on March 31st and is awaiting sentencing.

The civil lawsuit filed by Pennington seeks over $75,000 in damages. It also includes lurid accusations that Hill repeatedly made "sexually aggressive" and "physically inappropriate" contact with the female staff of Bin 73, including a "tipping process" that involved placing his entire hand inside a waitress's jeans. 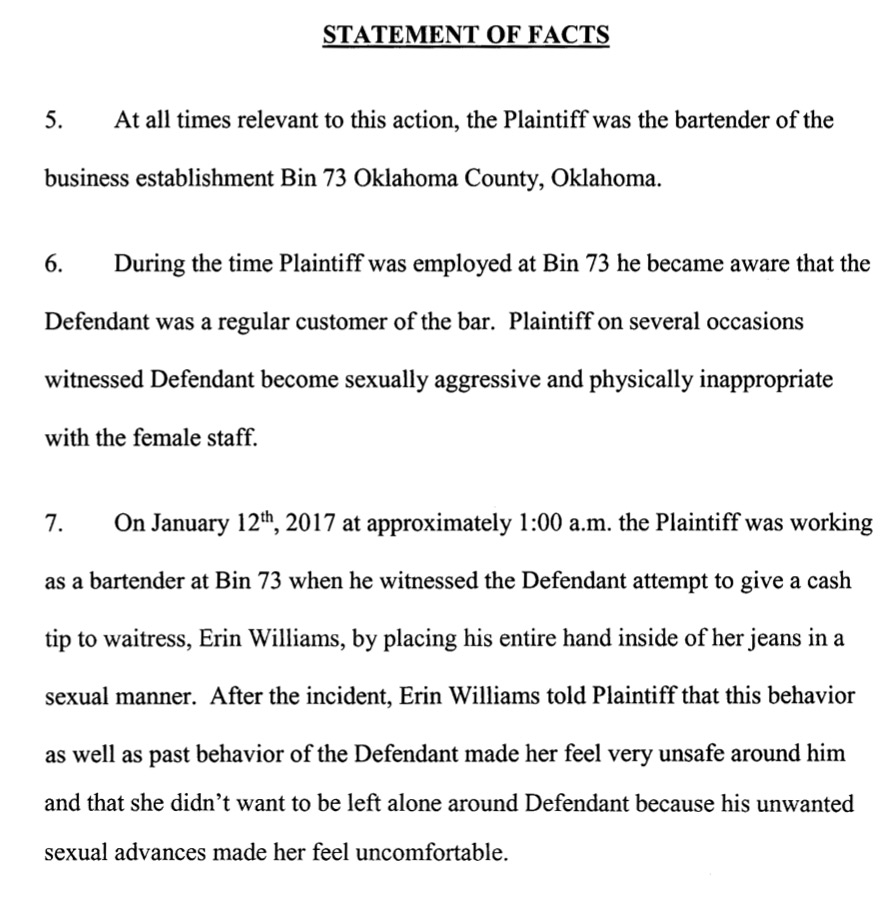 Sadly, accusations like this are not very shocking. I've worked in and around the service industry for years, and there are way too many entitled creeps out there who do shit like that. Lawmakers should pass a law keeping these asshats confined to places like Twin Peaks where they belong.

Wait a second. The guy allegedly sexually harassed waitresses and also threatened bartenders with acts of violence and they still let him back into the bar? If that's true, that's ridiculous. Keep it in mind the next time you're looking for something to do on N. Western.

We reached out to Kyle Hill for comment. In an email, he explained that he has not been given authorization by his attorneys to comment on the matter, but "there are two sides to the story." He also said he "absolutely denies any accusations of sexual misconduct."

Stay with The Lost Ogle. We'll keep you advised.